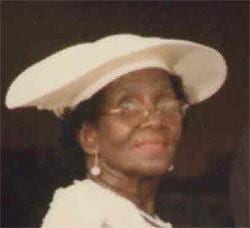 CATHERINE ALBERTHA CLEMENT of Fairfield Road, Black Rock, St. Michael entered peacefully into rest on February 06, 2017. Housewife and member of the James Street Methodist Church Women’s League.
Beloved wife of the late John Clement.
Mother of Trevor Clement (retired Director of the Transport Authority), Glenmore Clement (Sultanate-of-Oman), Hayden Clement (CLEMCO Electrical Services Inc.), Cynthia Crichlow (Canada), Cathy-Ann Beckles (Sagicor Life Inc) and the late M. Patricia Goodridge.
Grandmother of Patrick, Peter, and Pearson Goodridge, Marsha Alleyne, Cassandra and Christina Crichlow, Dr. Tamara Clement, Raquel, Benjamin, Chance and Cherish Clement and Matthew Beckles.
Great Grandmother of many.
Sister of the late Kathleen, Vernon and Lemuel Cox and Verona Nicholls.
Aunt of Ralph, Jeanette, Hallam, Maureen, Juliet, George and Michael and many more.
Sister-in-law of the late George Clement.
Mother-in-law of Antonio Beckles (Republic Bank) and Michael Crichlow (Canada).
Friend of Brenda Harding, Pauline Roberts, Evangeline Daniel and many more.
The funeral of the late Catherine Albertha Clement leaves Lyndhurst Funeral Home, Passage Road, St. Michael on Saturday, February 18th, 2017 for the James Street Methodist Church, where relatives and friends are asked to meet at 10:00 AM for the service. The cortege will then proceed to the Coral Ridge Memorial Gardens for the interment. The Organist, members of the Church Choir and Women’s League are kindly asked to attend. Flowers may be sent to the Lyndhurst Funeral Home no later than 8:00 a.m. on Saturday. The body of the late Catherine Albertha Clement will repose in the Colin Parkinson Memorial Chapel, Lyndhurst Funeral Home on Friday, February 17, 2017, from 4:00 – 6:00 p.m.

Mar-Iso Parris wrote on February 15, 2018 at 8:46 am
God is love (1 John 4:8) and he promises a happy future for all. He will swallow up at death forever as promised at Isaiah 25:8 in the near future and last enemy death will be brought to nothing (1 Corinthians 15:26). In a paradise earth Jehovah promises to wipe every tear from our eyes, death will be NO MORE, neither will mourning nor outcry nor pain will be anymore (Revelation 21:4). You have the marvelous hope of seeing your dear loved one again (John 5:28,29)

Nicolette Pinder wrote on February 15, 2018 at 8:46 am
My condolences to the family of Mrs.Catherine Clement. May the words of Isaiah 25:8 that God will swallow up death forever and John 5:28,29 which shows that all those in the memorial tombs will be resurrected be a comfort to the entire family.

Elmena Clement wrote on February 15, 2018 at 8:46 am
Tears are a language God understands. To my cousins my deepest sympathy and to the extended family. We will be praying for you and may God bless you all.

Ronald Bruce wrote on February 15, 2018 at 8:45 am
Hayden in this sorrowful time I would like to extend to you my heartfelt condolence on your mother's passing. May our Lord comfort you and your loved ones.
Funeral NoticePlease note that the funeral for Marcellus Louis is on Thursday, July 15th, 2021 at 2:00 PM
Topic: Grieving Differently with COVID 19In this Social Work Season 2021 of Love and Loss ... Sunday March 21 takes us to a place of 'Loss'