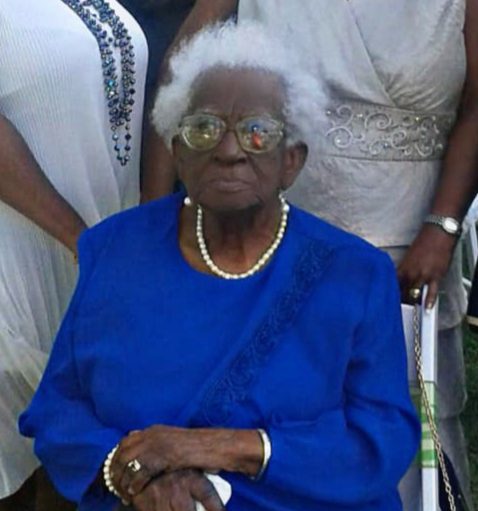 SKEETE-GREENIDGE – GLADYS LOUISE, aged 96, of Holder’s Hill, St. James, entered into rest on December 17, 2021.
Daughter of the late Edward Ellis and Jestina Skeete. Wife of the late Darnley Dacosta Greenidge. Loving Mother of Deborah Skeete-Gibson, Ricky Skeete (former Barbados and BCL Cricketer and Golfer), Pamela Gibson, Sherrill Skeete-Weir, Glyne Skeete, Cyralene Skeete-Greene and the late Guy Skeete. Grandmother of 17. Great-Grandmother of 15 and Great-Great-Grandmother of 1.
Sister of Edna Maynard, Marie, Beryl and Edwin Leacock, the late Kenneth and Eric Walters. Sister-in-law of Sylvia Gay and the late Lorenza Taitt.
Mother-in-law of Jethro Gibson, Gregory Weir, Dale Greene and the late Harcourt Gibson. Relative of the Walters, Haynes and Leacock families. Friend of Pasty Lashley, Eudine Blackman, Shirleyann Burke-Gibson and many others.
A service of celebration and thanksgiving will be held on Thursday, January 06, 2022 at St. John The Baptist Anglican Church, followed by the interment at the St. James Cemetery. Flowers may be sent to Lyndhurst Funeral Home no later than 7:30 a.m. on Thursday. The body of the late Gladys Louise Skeete-Greenidge will repose in the Colin Parkinson Memorial Chapel, Lyndhurst Funeral Home on Wednesday, January 05, 2022 from 4:00 – 6:00 p.m. Kindly note that all COVID-19 protocols will be in effect.

The family invites you to view the live stream of the service; to view, please click here.

Jennifer Haynes wrote on January 6, 2022 at 10:01 am
My condolences to the Skeete family on the loss of their mother and asking God to help them through this time of sorrow, may she Rest In Peace.

Mona Rouse wrote on January 6, 2022 at 9:57 am
To Beryl and the extended Leacock family
I am truly sorry for your loss. I extend my deepest and most sincere condolences and I pray that our Lord bless and comfort you and your family during this difficult time. May she Rest In Peace.

Erskine Husbands wrote on January 6, 2022 at 6:57 am
My condolences goes to the Greenidge, Skeete and Weir families during this personal difficult moment.
RIP Gladys.
Hello Gregory.. Friend Erskine. USA

Sending condolences on the passing of your Mom. May she rest in peace and rise in glory.
Funeral NoticePlease note that the funeral for Marcellus Louis is on Thursday, July 15th, 2021 at 2:00 PM
Topic: Grieving Differently with COVID 19In this Social Work Season 2021 of Love and Loss ... Sunday March 21 takes us to a place of 'Loss'