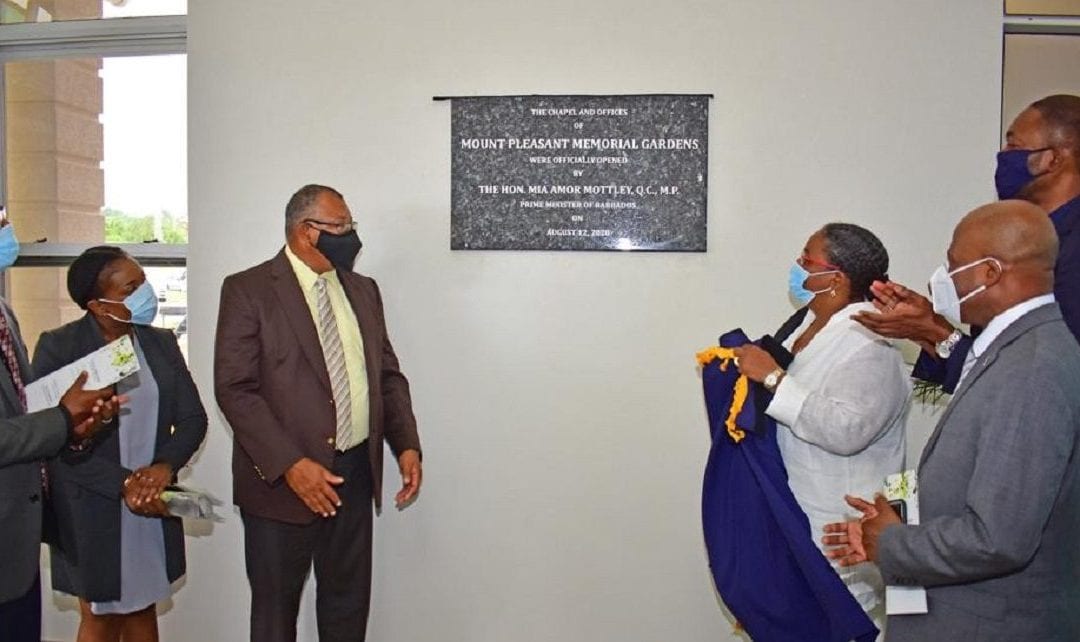 Prime Minister Mia Mottley today expressed shock at the length of time it took for the Mount Pleasant Memorial Gardens to be completed.

And according to Peter Griffith, the chairman of Ember Investments Corporation – the developers of the project – the project costs tripled over the period.

Speaking during the official opening ceremony of the chapel and offices at Pleasant Hall, St Peter today, Mottley said it was disappointing its construction had taken almost 15 years to be completed.

“In this establishment we find ourselves confronted with the best and the worst of who and what we have become. That an investment could have to be shepherded for the length of time that this one has, for nearly 15 years, is not a good statement or reflection of where we have been as a country,” the Prime Minister noted.

Mottley told those gathered that when Griffith approached her and Minister in the Ministry of Economic Affairs and Investment Marsha Caddle in 2018 to help make the project a reality, they were more than happy to assist.

“For us as a Government it represented confidence on your part, but you had to take a decision as to whether you would be prepared to invest money against the backdrop of all that we were managing to do economically with the restructuring of our debt and the repurposing of where we wanted this economy and this society to go.

“And I am grateful to you on behalf of the nation that you had that confidence that in spite of the cloudy atmosphere that you could see clearly into the future that this country would find its way back and that the investment of $12 million here would be something that you would realize a return upon, because of that confidence,” Mottley said.

Griffith had earlier disclosed that the project initially started in 2006, but encountered several roadblocks.

This he said led to a skyrocketing budget.

“This project was on since 2006. It has been a hard ride gaining all the permissions that were necessary. It came in two segments, but we persevered and what would have been a project for $4 million, by the time now that we are finished we have a project for $12 million.

“But I don’t feel too badly about it now, looking back. The directors and the shareholders of Ember Investments Corporation are very pleased with how it is turning out,” he noted.

Griffith maintained it was only fitting that former Prime Minister Owen Arthur be buried in the Memorial Gardens.

He revealed that it was Arthur who arranged financing for the project through the then Barbados National Bank, at a time when no other financial institution was willing to do so.

“The gentleman who has led this country for 15 years, Mr Owen Arthur, who is going to be buried out here, he gave us that opportunity. Not only did he give us the opportunity but he made sure that the Barbados National Bank of the day financed the project.

“So I think it is really fitting that on his passing this cemetery was chosen for him. He made it very clear this was the place to be. He wanted to be here,” Griffith said.

Minister of Labour and Social Partnership, Colin Jordan, lauded the developers for their vision, determination, perseverance and ability to execute.

He also suggested that the finished project was an upgrade over the Coral Ridge Memorial Gardens and Crematorium in Christ Church which is also owned by Ember Investments Corporation.

Funeral NoticePlease note that the funeral for Marcellus Louis is on Thursday, July 15th, 2021 at 2:00 PM
Topic: Grieving Differently with COVID 19In this Social Work Season 2021 of Love and Loss ... Sunday March 21 takes us to a place of 'Loss'