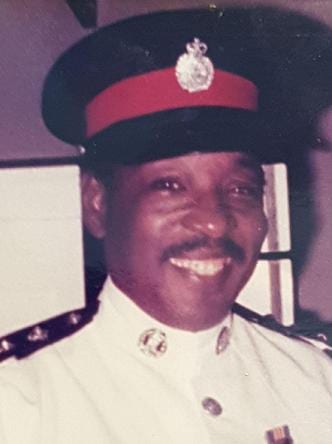 COOK – CHARLES RICHARD, BSS, J.P., aged 84, of #37, Jazreel, Ruby, St. Philip, entered into rest on June 24, 2017. Former Superintendent and Court Prosecutor of the R.B.P.F.
Husband of Patricia Cook (Former Chief Immigration Officer). Father of Pastor Richelle White. Father-in-law of Apostle Mark White (both of Tower of Power Global Network Ministries). Grandfather of Jahmai, Hanniel and Uel White. Brother of Mavis Brewster (U.S.A.), Charles Cook (Canada), Nigel Parris (T&T), Lucille, Denise and Freddie Cook, Anita Moore and Cynthia Searles. Close Friend of Sir Richard Cheltenham, Madam Justice Sandra Mason, Charles Leacock (Director of Public Prosecution), Mr. Pat Cheltenham, former and present members of the R.B.P.F. and many others too numerous to mention.
The funeral leaves Lyndhurst Funeral Home, Passage Road, St. Michael on Friday, July 07, 2017 for Western Light Church of the Nazarene, where relatives and friends are asked to meet at 3:00 p.m. for the service. The cortege will then proceed to Coral Ridge Memorial Gardens for the interment. Tributes will commence at 2:00 p.m. Flowers may be sent to Lyndhurst Funeral Home no later than 12:00 p.m. on Friday. The body of the late Charles Richard Cook will repose in The Colin Parkinson Memorial Chapel, Lyndhurst Funeral Home on Thursday, July 06, 2017 from 4:00 – 6:00 p.m.

Rahaman wrote on February 14, 2018 at 12:07 pm
Deepest condolences the Cook Family from the Rahaman Family. Your former neighbours who lived on the other side of the road with the Chowmein factory.

Lorna Hoyte wrote on February 14, 2018 at 12:07 pm
Condolences to Mavis, Lucille, Freddie and the entire family on the passing of your brother. May his soul Rest In Peace.

Brenda John wrote on February 14, 2018 at 12:06 pm
My condolences to the entire family of Charles Cooke. May the God of comfort Jehovah continues to sustain and support you all at this difficult time.
2 Corinthians 1:3,4

Andrea (Ann) Marshall of Houston, Texas wrote on February 14, 2018 at 12:06 pm
Condolences to Mavis, Denise, Lucille and the rest of the family. From the Houston Texas posse...May your brother Rest In Peace
Funeral NoticePlease note that the funeral for Marcellus Louis is on Thursday, July 15th, 2021 at 2:00 PM
Topic: Grieving Differently with COVID 19In this Social Work Season 2021 of Love and Loss ... Sunday March 21 takes us to a place of 'Loss'