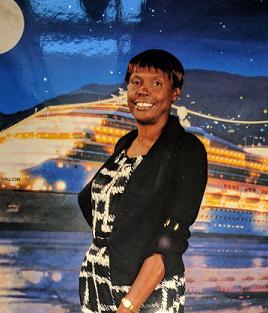 Luci-Ann Forde-Johnson wrote on February 14, 2018 at 9:50 am
Susan, Junior, Andy, Ella, Mr & Mrs Cumberbatch and the entire family, I just wanted to express my deepest condolences to all of you in this time of grief, please know that I am very saddened by your loss, my thoughts and prayers are with you, I pray that God will comfort you and relieve your pain in the days, months and years to come.

To Shakelia, I never had the pleasure of meeting you but I know the loss of a parent is one of the hardest challenges of your life, just remember, the hurt, the pain and the (why it happened to me) may never seem to leave you but if you work hard to achieve all of the goals and fulfill all those dreams your mom has for you then you will find some comfort and start to heal, I use the word "has" and not the word "had" because you will never be alone she will always be there cheering you on as you accomplish your goals/dreams.

Our Deepest Sympathy to the entire family

From Luci-Ann, Ronald and Cayla Johnson

Jeneifer Price wrote on February 14, 2018 at 9:49 am
Sincere condolences to Dezrene, other relatives and friends. I know her loss will be felt.

Roosevelt Corbin (Bacco) wrote on February 14, 2018 at 9:49 am
Sad to see a friend go in this manner, I know you will be miss my friend. To the family, may God be with you on this sad occasion. May she rest in peace. From my family to yours.

Celeste Walrond wrote on February 14, 2018 at 9:48 am
Deepest sympathy to John and family on the loss of your loved one

Mary Griffith wrote on February 14, 2018 at 9:47 am
Sincere condolences to my husband and his family on the loss of a great-niece, wife, daughter.mother, sister and friend. Her loss is untimely but we know the angels will be rejoicing as she lived her life on that promise of seeing Our Lord and Saviour someday. May she Rest in Peace and rise in glory. Rest on Berest

The Myasthenia Gravis Association wrote on February 14, 2018 at 9:47 am
On behalf of the members of the Myasthenia Gravis Association of which Dezrene was a member, we express deepest sympathy to her husband, daughter, Dezrene, other family members, relatives and friends. May she rest in peace and rise in glory.
Funeral NoticePlease note that the funeral for Marcellus Louis is on Thursday, July 15th, 2021 at 2:00 PM
Topic: Grieving Differently with COVID 19In this Social Work Season 2021 of Love and Loss ... Sunday March 21 takes us to a place of 'Loss'