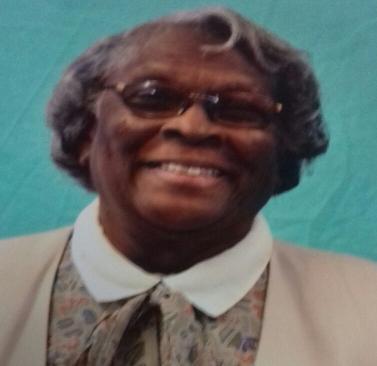 BUSHELL – DAPHNE EDITHA, aged 88, late of Atlanta, Georgia, USA and formerly of Kings Village, Dayrells Road, St.Michael entered into rest on July 13, 2017. Widow of George Bushell. Beloved Mother of Peter Bushell and Hazel Douglas (both of the USA), Angela Bushell-Skeete, David and Merville Bushell. Cherished grandmother of Jennifer and Brian Bushell, Zachary Douglas (all of the USA), Dr. Carol-Jean Bushell-Hunte, Dwayne Bushell, Tanesha, T’amor and Taneille Skeete. Great-grandmother of Sophia Bushell. Mother-in-law of Arlene Bushell, Lloyd Douglas (both of the USA), Bryce Skeete and Salene Bushell. Sister of Viola Jones, Pauline Taylor and the late Charles, Fitzherbert and Darryl Blackman. Aunt of Cheryl and Anthony Blackman, Silvia Harte, O’brian and Sharon Callender, Patricia and Coral Taylor. Sister-in-law of Lorieta Ward, Monica Greene (both of the USA), Vera Blackman, Michael and Arthur Greene. A loving friend of Joyce and Cecil Jordan, Velda Williams, Lucille Linton, Hazel Maughn and Barbara Walton (all of the USA), Vivienne Jordan (Canada), Mrs. Evelyn Weekes and the members of Ephesus Seventh Day Adventist Church, Barbados, the Lashley family of Ellerton, St. George and the members of the Maranatha Seventh Day Adventist Church, Atlanta, Georgia.The funeral leaves Lyndhurst Funeral Home, Passage Road, St. Michael on Tuesday, July 25, 2017 for the Ephesus Seventh Day Adventist Church, Dalkeith Hill, St. Michael, where relatives and friends are asked to meet at 10:00 a.m. for the service. The cortege will then proceed to Westbury Cemetery for the interment. Tributes commence at 9:00 a.m. Flowers may be sent to Lyndhurst Funeral Home no later than 8:00 a.m. on Tuesday. The body of the late Daphne Editha Bushell will repose in The Colin Parkinson Memorial Chapel, Lyndhurst Funeral Home on Monday, July 24, 2017 from 4:00 – 6:00 p.m.

Marva Chase wrote on February 14, 2018 at 10:24 am
I extend my Sincere Condolences to the children and extended family of the late Daphne Bushell.

Lareta, Monica and Greene Family wrote on February 14, 2018 at 10:24 am
We hope you will remain strong during this time of sorrow and loss, and that God will provide comfort and peace even as you grieve your mother's passing. She has been a wonderful mother to wonderful and loving children and grandchildren and a warm and loving sister-in-law to us. Please accept our sincere condolences. She has run well, fought hard and deserves the rest. May she rest in peace.

Angela Bushell-Duluth GA wrote on February 14, 2018 at 10:23 am
My heart goes out to all my cousins at this sad time in their lives. I will let you know that as long as your hearts are with the heavenly father, you will see both of your parents, grandparents and great-grans again. God bless

I never knew I was so very close to her here in Duluth GA.
Funeral NoticePlease note that the funeral for Marcellus Louis is on Thursday, July 15th, 2021 at 2:00 PM
Topic: Grieving Differently with COVID 19In this Social Work Season 2021 of Love and Loss ... Sunday March 21 takes us to a place of 'Loss'