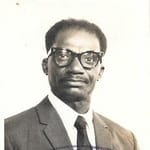 ERROL WHITFIELD WHITE, aged 91, better known as “All Brain” of Well Gap, Cave Hill, St. Michael, entered into peaceful rest on December 24, 2016. Husband of Elaine White.Father of Anthony White (Ready Mix Ltd) and Angela Cox (Chefette Restaurants).Step-father of Merlene Scott.Brother of Kenneth White (UK), Joseph White (USA) and the late Winfield White.Grandfather of Alecia White, Alexa White (Wireless World), Kimberley and Christopher Cox.Great Grandfather of Sakya Bannister.Father-in-law of Pauline White (Bayview Hospital).Dear Friend of the Francis and Wickham families.Relative of the Henry family.The funeral leaves Lyndhurst Funeral Home, Passage Road, St. Michael on Tuesday, January 10, 2017, for the Power in the Blood Assembly, Kew Road, St. Michael, where relatives and friends are asked to meet at 10:00 a.m. for the service. The cortege will then proceed to Westbury Cemetery for the interment. Flowers may be sent to Lyndhurst Funeral home no later than 8:00 a.m. on Tuesday. The body of the late Errol Whitfield White will repose in the Colin Parkinson Memorial Chapel on Monday, January 09, 2017 from 5 – 6 p.m.