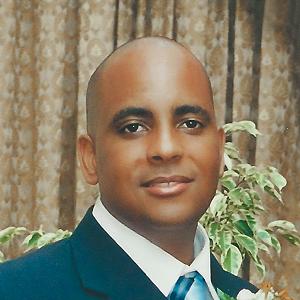 JENKINS – JAMES DAVID, of 552 Princess Avenue, London, Ontario, entered into peaceful rest on May 26, 2017.
James David Jenkins, age 46, passed away on Friday, May 26, 2017, at the Queen Elizabeth Hospital in Bridgetown, Barbados. He was born on October 26, 1970, in London, Ontario, Canada to the late David Ross Jenkins and Maureen Angela Jenkins, nee Rollock. James grew up in London, Ontario. He graduated from A.B. Lucas Secondary School in London, Ontario in 1988. After high school, he attended The University of Western Ontario where he received an Honors Bachelor of Arts Degree in Urban Development. He was a business owner and real estate investor for 15 years. James married Juliana Blackett in 2003 in London, Ontario. They were happily married for 13 years. He enjoyed business and travelling with his family. He was known as a warm and kind individual and will be greatly missed. James is survived by his spouse, Juliana; daughter, Izabelle; mother, Maureen; siblings, Paul and Michelle and their spouses, Candice and Glynn; nieces, Ella and Maya; relatives, including the Jenkins family of London, Ontario, the Rollock family, Robert Quintyne and family, Elizabeth Cupples and family, Otha Blackett and family, and many close friends.
The funeral leaves Lyndhurst Funeral Home, Passage Road, St. Michael on Saturday, June 10, 2017, for the Chapel of Coral Ridge Memorial Gardens, where relatives and friends are asked to meet at 3:00 p.m. for the service. In lieu of flowers, memorial donations can be sent to the education fund for his daughter via Paypal.com using the email address: izabelle.jenkins@gmail.com. The body of the late James David Jenkins will repose in The Colin Parkinson Memorial Chapel, Lyndhurst Funeral Home on Friday, June 09, 2017 from 4:00 – 6:00 p.m.

Paula Nurse (Head Nurse @ SILS) wrote on February 14, 2018 at 1:09 pm
From the management and staff of SILS Dialysis, we want to extend our condolences to you at this time. May he rest in peace and rise in glory.

Hewitt from the UK (Glynn's Mum & His Brother) wrote on February 14, 2018 at 1:09 pm
It was with great sadness that we learnt of the passing of James. Our sincere condolences go to Juliana and Izabelle and also to Maureen and her family at this very difficult time.
We are linked to you through the marriage of Michelle and Glynn and despite the distance between us, we consider ourselves to be family.
Our thoughts will be with you on Saturday and the coming weeks.
Audrey & Stephen.

A Friend wrote on February 14, 2018 at 1:08 pm
So sorry to hear of David's passing. Death is such an enemy of us all. Whether young or old, the pain still hurts. When the sting of death affected me, I found comfort in Gods Word at Revelation 21:3,4. I hope you find the comfort needed at this time.

David M. Griffith & Family wrote on February 14, 2018 at 1:08 pm
We are so sorry to hear of your loss. James went to A.B. Lucas with my sons, David Jnr and Lee Griffith. We were in deep shock when we heard the news. He will be missed by his many friends in North London Ontario Canada, especially the A.B.Lucas Crew. The Jenkins family are well loved in the London Community, and James and Paul were amongst the best. You are in our prayers and thoughts.

Haley, Jacob & Perry Spevack wrote on February 14, 2018 at 1:07 pm
Aunt Maureen & Family, Please accept our heartfelt condolences on the loss of James. We enjoyed the time we spent with James, Juliana & Izabelle at your house over Christmas. Wishing you all much love, support, and strength at this very difficult time.

Valerie (Cole) Else wrote on February 14, 2018 at 1:07 pm
My sincerest condolences to the Rollock, Jenkins and extended family and especially to Maureen. You are all in my heart & my thoughts at this difficult time.

Ann Gaskin wrote on February 14, 2018 at 1:06 pm
Dear Maureen & Family; I am so sorry to hear of the passing of James.
Be strong, it is never easy for a mother to bury her child.
Cherish the memories for the short time you shared with him, but think of the happiness of Dave who now has him in his arms again.
My thoughts and prayers are with you.
Funeral NoticePlease note that the funeral for Marcellus Louis is on Thursday, July 15th, 2021 at 2:00 PM
Topic: Grieving Differently with COVID 19In this Social Work Season 2021 of Love and Loss ... Sunday March 21 takes us to a place of 'Loss'