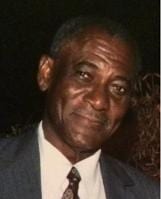 JAMES DOUGLAS PRESCOTT, affectionately known as “Pressy” of Eastlyn, St. George, entered into rest on July 23, 2017.
Son of the late Lilian Prescott and Japeth Simpson.
Beloved Father of Nicole Gollop.
Grand-Father of Tashiya Young.
Loving Brother of Gordon Prescott and the late Ralph Prescott.
Uncle of Henderson Pinder, Rudolph and Crystal Prescott.
Brother-in-Law of Janet Prescott.
Great-Uncle of 3.
Relative of the Prescott, Ward, Carter, Simpson, Prescod and Phillips families.
Friend of many.
The funeral leaves Lyndhurst Funeral Home, Passage Road, St. Michael on Thursday, August 10, 2017, for the Chapel at Coral Ridge Memorial Gardens, where relatives and friends are asked to meet at 10:30 a.m. for the service, followed by a private cremation. In lieu of flowers, donations to the Men’s Clinic of the Barbados Family Planning Association would be gratefully appreciated.

A Friendly Neighbour wrote on February 14, 2018 at 9:18 am
Sending love and condolences to the family.
I hope in this time of grief that you are able to focus on the love and comfort that we get from our God Jehovah and from his word the bible.
2 Cor 1:3,4 - 3 Praised be the God and Father of our Lord Jesus Christ,+ the Father of tender mercies and the God of all comfort, 4 who comforts us in all our trials so that we may be able to comfort others in any sort of trial with the comfort that we receive from God.
Funeral NoticePlease note that the funeral for Marcellus Louis is on Thursday, July 15th, 2021 at 2:00 PM
Topic: Grieving Differently with COVID 19In this Social Work Season 2021 of Love and Loss ... Sunday March 21 takes us to a place of 'Loss'