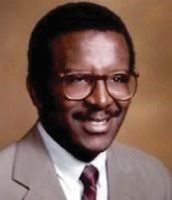 DR. MARTIN WILLIAMS
Born: October l, 1941, to Walter and Leotta Williams on the Island of Barbados, West Indies. There he received his elementary education at Boys Foundation School, Christ Church.
Dr. Martin Williams then moved to the United States of America to attend Long Island University in Brooklyn, New York. In 1964 he met Molly E. Burnett, and they married in 1965. In 1973 Dr. Martin Williams began working on his Doctorate Degree at Binghamton University at The State University of New York, in Binghamton, New York. In 1976 he began working at Northern Illinois University as an Associate Professor in Economics. Soon after that he became a Professor of Economics at the university. Dr. Martin Williams retired from Northern Illinois University in 2004 after 28 years as a Professor in the Economics Department with Emeritus status.
Dr. Martin Williams enjoyed working on Parks Plantation, St. Joseph, caring for the livestock, and building things with his hands like his father Walter Williams. Dr. Martin Williams enjoyed traveling and spending time with family in The Bahamas and Colorado. He also enjoyed the occasional golf outing with his son.
Dr. Williams was predeceased by his parents Walter and Leotta; and grandson Matthew. He is survived by his beloved wife Molly; children Hamilton and Terry; granddaughter Katherine; brother Reynold; sisters Audrey, Ermetta, and Shirley; nieces and nephews Sidney, Collis, Phillip, Hallam (Michele), Laurence (Leanne), Dianne (Henderson), Heather (Robert), Andrea, Russell (Cheray), Dwayne (Gina), Celia, Nicole (Kenneth), Andrea (Daniel), and Sherri-Ann (Kerry); and dear friends Sir Trevor and Sharen Carmichael, Lawrence and Carol Nurse, Dr. J. K. Mullen, Jeffrey Shorey, and many others.
A memorial service of celebration and thanksgiving will be held on Saturday, September 10, 2022 at Coral Ridge Memorial Gardens, The Ridge, Christ Church, where relatives and friends are asked to meet at 10:00 a.m. Kindly note that all COVID-19 protocols will be in effect.

The family invites you to view the live streaming of the service; to view, please click here

Sherry-Anne Felix wrote on September 4, 2022 at 3:58 pm
To the family of the late Dr. Martin Williams, we extend our deepest sympathies to you during this difficult time. You are in our thoughts and prayers.

Victor Cooke wrote on September 4, 2022 at 12:19 pm
Condolences to family and friends, like Jeffery Shorey. I came to know Martin through tours I led to his farm, where participants learned about the Barbados Blackbelly Sheep and petted lambs. He was a conscious man.
Funeral NoticePlease note that the funeral for Marcellus Louis is on Thursday, July 15th, 2021 at 2:00 PM
Topic: Grieving Differently with COVID 19In this Social Work Season 2021 of Love and Loss ... Sunday March 21 takes us to a place of 'Loss'