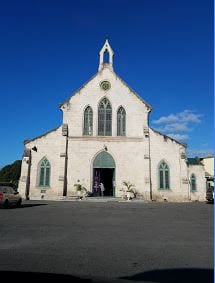 Donna Campbell-Crichlow wrote on March 1, 2018 at 7:37 am
To Debra, Trudy, Nadine, Mickey, Tonya, Marsha and Annalisa, my deepest condolences on the departure of Waple your mother. I will miss seeing her on my every trip to Barbados and the stories she would have to make me laugh about the old neighbourhood. She worked hard for her family and prayers are for her reward in Heaven.

Andrea (Ann) Hall née Carrington wrote on February 27, 2018 at 2:54 pm
The Carrington, Hall and Wilkinson families extend condolences to the family of my Aunty Waple. We recently saw Aunty Waple and she met my daughter for the first time and we hugged. Not knowing that was the last hug. My mum Doll and father Precious pre-deceased her and they were good, good friends. You will forever remain in our hearts. A loving person, like you were, is hard to find.

Rest In Peace and Rise in Glory my dear Aunty Waple.

Zorita Marshall and Family wrote on February 27, 2018 at 7:54 am
The Marshall Family extends sincere condolences to the Blackman Family on the passing of their beloved "Waple" a fun-loving amazing Lady who is now at peace and resting in her Creator's Arms. Waple will be greatly missed by all but we will continue to cherish her memories.
May God strengthen and bless each of you at this time of mourning.
Matthew 5:4 “Blessed are those who mourn, for they shall be comforted."

Advantage wrote on February 26, 2018 at 12:46 pm
We are so very sorry for your loss. Please accept our prayers during this difficult time.

Wendy wrote on February 26, 2018 at 7:09 am
RIP cuz. Still cannot believe you are gone. You were an amazing woman. My condolences to the family.
Funeral NoticePlease note that the funeral for Marcellus Louis is on Thursday, July 15th, 2021 at 2:00 PM
Topic: Grieving Differently with COVID 19In this Social Work Season 2021 of Love and Loss ... Sunday March 21 takes us to a place of 'Loss'