OLGA ELRITA ALLEYNE, aged 82, late of Lyder’s Hill, St. Philip. A faithful sister of Ragged Point Wesleyan Holiness Church. As we prepare to say goodbye, we will continue to cherish our memories and be thankful to God for having the privilege of spending our lives with you filled with his many blessings and guidance. Wife of the late Whitfield Alleyne. Mother of Clasfield Hinds (Sissy from the gym), Darnley, Gertrude, Gale and Frederick Alleyne. Step-mother of Lilian Alleyne and the late Clarence Clarke. Grandmother of Chantal Alleyne-Mason, Ryan, Sharon, Suzanne, Sherne, Nikita and Darrian Alleyne, Shanez Grazette-Alleyne, Neville Maynard, Tremaine McCollin, Rosita Brathwaite, Richard Jardon, Roslyn, Sueann, Antonette and Witfield Gooding, Rayna Clarke and Maliajua Cherubin. Great Grandmother of 13. Aunt of many. Sister of Eleanor Layne, Hilma Leacock, Lolita Grazette, Eric, Glenville and William King and the late Henderson, Colbourne, Theophilus and Jessica King. Mother-in-law of Oneal Hinds and Judy Alleyne. Friend of Sis Proverbs. Relative of the Downes, Jones and King families. A service of Prayers and Thanksgiving celebrating the Life and Stewardship of Olga Elretia Alleyne will be held on Saturday, August 13, 2016, at the Massiah House Wesleyan Holiness Church, Massiah Street, St. John, where relatives and friends are asked to meet at 1:30 p.m. The cortege will then proceed to Bushy Park Cemetery for the interment. Flowers may be sent to Lyndhurst Funeral Home no later than 11:30 a.m. on Saturday. The body of the late Olga Elretia Alleyne will repose at the Ragged Point Wesleyan Holiness Church, on Friday, August 12, 2016, from 4:00 – 6:00 p.m. Transportation will be provided on Saturday, August 13, 2016, and persons are asked to meet at the Ragged Point Wesleyan Holiness church, no later than 11:45 a.m. 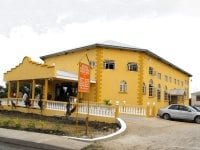 Brenda Pinder wrote on February 16, 2018 at 11:58 am
My condolences to the entire family of Mrs. Olga Alleyne. We can really look forward to Jehovah's promise of the resurrection at Acts 24:15. God's promises are sure.

Renee wrote on February 16, 2018 at 11:58 am
I would like to send my condolences to the family of Ms. Olga. I would like to leave you with a comforting scripture during this difficult time John 5:28,29
Funeral NoticePlease note that the funeral for Marcellus Louis is on Thursday, July 15th, 2021 at 2:00 PM
Topic: Grieving Differently with COVID 19In this Social Work Season 2021 of Love and Loss ... Sunday March 21 takes us to a place of 'Loss'