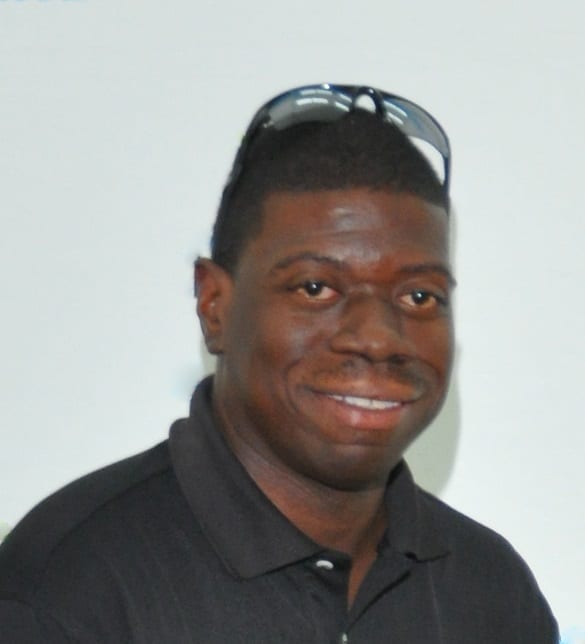 ROGER MICHAEL IAN SPENCER- late of Ruby Park, St. Philip, entered into rest on Monday April 08, 2019.
Son of Winston and Claudette Spencer.
Husband of Evelyn Spencer.
Father of Alexandra-Pearl and Anya-Michelle Spencer.
Grandson of the late Leotta Proute.
Brother of Winston Ifill, Sheldon Spencer and Nicole Wilson.
Brother-in-law of Juliet Spencer, Darrell Wilson, Eleanor Headley and Edwin Devonish.
Uncle of Kristin and Imani Spencer and John-Paul and Althea-Marie Wilson.
Nephew of Erma Pinder, Elaine Berkeley, Tekla and Yvette Proutt and Elsie Spencer.
Cousin of Ricardo Proute, Rodney Berkeley and many others.
Relative of the Yarde family.
The funeral leaves Lyndhurst Funeral Home, Passage Road, St. Michael on Thursday, April 18, 2019, for the chapel of Coral Ridge Memorial Gardens, The Ridge, Christ Church where relatives and friends are asked to meet at 2:00 p.m. for the service and interment. Flowers may be sent to Lyndhurst Funeral Home no later than 12:30 p.m. on Thursday.

shirley pinder wrote on April 18, 2019 at 3:39 pm
To my dearest cousin Roger with the biggest smile and kind heart. Memories do not leave like people do....a saying so true.
You will always be in my heart now and forever.
Love you
Your cousin Shirleyxx

KaTHLEEN R GIBSON wrote on April 18, 2019 at 1:36 pm
Sincere Condolences to the Spencer and Proute Families. You are in our thoughts and Prayers. Love You All. The Cadogan and the Stuart Faamilies.

Colleen White-Hayes formerly (White) wrote on April 18, 2019 at 1:30 pm
Roger rest in heaven my high school friend. May the peace that passes all understanding stay with your surviving family. I remember Roger’s smile and gentle heart when we were in school. He would walk through the halls of Foundation School with humility and kind pleasantries. He would always say hello if she saw you.
I extend my deepest sympathy to his family, mom and dad and relatives.
Sincerely,
Colleen White-Hayes
USA

Faith McGeary wrote on April 18, 2019 at 6:40 am
My condolences to Evelyn and the rest of Spencer family.

Kathy ann Duporte wrote on April 16, 2019 at 2:43 pm
Sharing in your sadness as you remember Roger. Words would not wipe away your tears but I am sending healing prayers and comforting hugs.
Funeral NoticePlease note that the funeral for Marcellus Louis is on Thursday, July 15th, 2021 at 2:00 PM
Topic: Grieving Differently with COVID 19In this Social Work Season 2021 of Love and Loss ... Sunday March 21 takes us to a place of 'Loss'