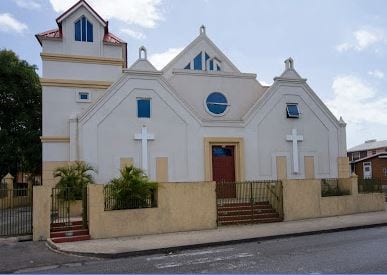 Ambrose Allan Davis wrote on February 16, 2018 at 9:02 am
To Velda, Steven, Charles, Maureen, Margaret and Ronald's entire family. I would like to offer my deepest condolences to your family from the Davis. I was not aware that Ronald had passed until this very moment. I hope you will find the peace you'll need to carry you through.

With our love and sympathy,
Fondly,
Ambrose & Family

Mar-Iso Parris wrote on February 16, 2018 at 9:02 am
At Acts 24:15, the Bible tells us that there will be a resurrection. We will have the hope of seeing our loved ones again (John 5:28,29). Many resurrections occurred and will again because the God of Love is eager to bring death to an end (Isaiah 25:8,1 Corinthians 15:26, Job 14:14,15)
Jehovah God promises a better and happy future (Rev 21:3-5). It is my prayer that these scriptures will bring some measure of comfort to you in this sad moment of time. Please continue to look to Jehovah, the God of all comfort, for strength to keep enduring until you are reunited with your loved one again.

Otis Bascombe wrote on February 16, 2018 at 9:02 am
Deepest condolences to the family of Ronald. May he RIP

Elza Griffith wrote on February 16, 2018 at 9:01 am
Condolences to the Gill family of Holligan Road, Bank Hall.
Funeral NoticePlease note that the funeral for Marcellus Louis is on Thursday, July 15th, 2021 at 2:00 PM
Topic: Grieving Differently with COVID 19In this Social Work Season 2021 of Love and Loss ... Sunday March 21 takes us to a place of 'Loss'